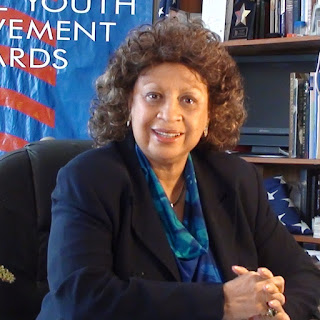 In 1996, she created THE ANNUAL YOUTH ACHIEVEMENT AWARDS to celebrate American youth for their vision of their own future.


An on-line application process invites any caring adult to serve as a Community Asset Manager (CAM) for one or more youth applicants.  The CAM assists the youth applicant in writing seven (7) goals valued by YouthUSA as “Money-n-the-Bank.”   Each application identifies one community asset with a “whole village” of 20 caring adults who provide support in one of seven areas of human development.   The program builds capacity for diverse local public charity missions seeking to engage and empower future leaders.


In Cobb County, GA, YouthUSA partnered with the local chapter of the Southern Christian Leadership Conference to invest in community-based organizations.  A federal grant application for Americorps funding addresses “a gulf of mistrust” as a national security threat to America’s future.  Ongoing grant development for the National Learn-2-Earn Partnership connects community leaders with U.S. Marines who have combated racial disparities since the 1940s.


The Montford Point Marine Association, a strategic partner in National Learn-2-Earn, preserves the military history and traditions of the United States Marine Corps while preserving the legacy of the first Black Marines.  The national veterans organization is planning a $2 million monument to promote inclusivity for future generations.


Perhaps by chance, or divine appointment, the YWCA (Young Womens Christian Association) of Northwest Georgia is dedicated to eliminating racism, empowering women and promoting peace, justice, freedom, and dignity for all.  The YWCA envisions a community free of domestic violence and sexual assault.


This is the 31st year that the YWCA has recognized Women of Achievement. Fifteen women who have demonstrated outstanding leadership and excellence in their professional and community endeavors and lives and/or works in Cobb, Cherokee or Paulding counties are eligible to receive this honor.


Tom and Wendy Bunch Heyer will be serving as the 2016 Tribute to Women of Achievement co-chairs.  Additionally, The Honorable Roy and Mrs. Marie Barnes, 80th Governor of Georgia and First Lady, will serve as our honorary co-chairs.  The YWCA is committed to delivering programs and services that increase the awareness and reduce the occurrence of domestic violence and sexual assault in our community.
Posted by AMWS at 10:35 AM