Whose Broad Stripes And Bright Stars?

From under the knee of a Minnesota police officer while other law enforcement peers watched, George Floyd’s last words on May 25, 2020 were, “I can’t breathe.”  Around the world, his “Black Life Matters” and his death has sparked global demonstrations of social unrest.  The poet Langston Hughes foretold events, as such, in his timeless query, What Happens To A Dream Deferred.

It was perhaps the sobering reality of “inspecting” a bunker that got the first family hoping for change. 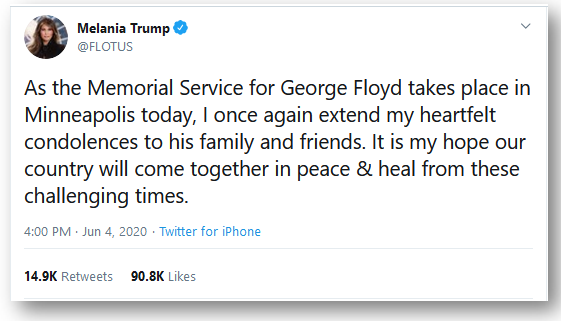 The Trumps were reportedly rushed to the White House's secure bunker on Friday evening (May 29) after protesters began dismantling a temporary barricade outside the building. Even an unbeliever could imagine olfactory evidence of presidential pee on a bunker wall as #ThePentecostProject revealed Kairos events on a 21st Century Chronos timeline.

Whether by choice or a perceived threat to national security, the Trump family emerged from the bunker with a greater appreciation for “coming out.”   During the week following Pentecost Sunday, with what appeared to be a Holy Bible in hand, the president with all his men, headed for a church building or two.

“We need a president who chooses hope over fear,” stated @JoeBiden.  “We are a nation in pain, but we must not allow this pain to destroy us.  We are a nation enraged, but we cannot allow our rage to consume us. Please stay safe.  Please take care of each other.”

Biden’s plea to “take care of each other” suggests that threatening behavior is not acceptable.  @realdonaldtrump’s retreat from a scheduled campaign event on June 19th in Tulsa, OK offered Americans one more chance to engage in the #BlackLivesMatter conversation.  Historically, more than 300 Black Lives were lost in Tulsa during a domestic terror attack on Black Wall Street.

In the 99 years since the attack, polling is just beginning to reflect a change in American values that “#Black Lives Matter.”  Now, #WeThePeople need to know whether to take a knee or stand proudly to the music.

American lives are at risk.  That makes #BlackLivesMatter a threat to national security.  In another era, @POTUS signed a “conditional” #BlackLivesMatter proclamation.  After some two years and one dead president, the official word finally got to Galveston, TX.

The number of killings in the United States by police disproportionately affects African Americans. Despite only making up 13 percent of the US population, Black Americans are two-and-a-half times as likely as white Americans to be killed by the police.  According to data compiled by Mapping Police Violence, a research and advocacy group, police in the United States killed 7,667 people between 2013 and 2020.

According to congressional records, at least 4,742 people, predominantly African Americans, were lynched in the United States between 1882 and 1968.   #BlackLivesMatter highlights victims of police violence as a subset within a broader threat to American lives.

Americans of all races are emerging from their bunkers to face the latest global recession.   One economic consequence of the COVID-19 health pandemic is a measurable decline in trust.   America has been healing from COVID-19 since the last days of last year.  They have been healing from lynching since before President Woodrow Wilson signed Flag Day into law.

In an election year, elected officials, tend to focus more on keeping a job than doing their job.   On one side, politicians argue for a need to outlaw lynching.   Politicians on the other side argue for preserving and passing on what they believe to be “American Values” as “One Nation Under God.”  Both sides value compromise, but up to now, getting there means one side loses.  What if the bill signed into law today set into motion a win-win for the nation?

A national narrative might build on a congressionally sanctioned standard for “trust.”  The U.S. House of Representatives might establish the Joint Select Committee on Fiscal Responsibility and Long-Term Economic Security.
In the greatest compromise of the 21st century,  A Global Economic Security Strategy might consider the economic value of an American life, then reinvest 10-1 toward making lynching an unacceptable American value.
#BlackLivesMatter, as an essential policy, values those lives lost to lynching as “Stolen Peoples Equity.”

Hope for such a national policy has been expressed by past presidents, current residents of The White House, and even The Holy See.   Believing that such a policy could emerge from a season of distrust challenges faith leaders around the world to pray rhetoric into reality.

#NoPoverty, one of 17 Global Goals for Sustainable Development,  might be demonstrated through economic investment toward a shared vision for trust.  A year of social action, promoted as #ThePentecostProject, establishes a timeline between May 31, 2020 and May 31, 2021.   The demonstration culminates on the 100th anniversary of one of the deadliest lynchings in American history.

Documentation of The Black Wall Street Massacre should be required study for any elected official in the United States.   Until Congress educates itself on Black Wall Street and Emmett Till realities,  America must challenge every member’s value to America’s future.   A national security threat is credible when American lives are threatened.   When people grieve through a Criminal Justice lens, they hope for justice.   But, the latest historically bad habit in a lineage of “Emmett Tills” calls for a broader vision of what it means to be American.

Francis Scott Key, an American lawyer and amateur poet, is credited with writing the vision “whose broad stripes and bright stars.”   Imagine, if you can, the 4th U.S. Attorney for the District of Columbia, from aboard the British ship HMS Tonnant, witnessing the British bombardment of Ft. McHenry, MD.   Should Americans accept the unredacted account of Key’s activities as acceptable truth in American history or fake news?

As a U.S. Attorney, Key must have been aware that United States practice of law sanctioned the enslavement of Free Africans.  However, no evidence suggests he ever charged a white American in the death of a Black American.

According to reports, Key publicly criticized slavery's cruelties, and a newspaper editorial stated that "he often volunteered to defend the downtrodden sons and daughters of Africa."  The editor said that Key "convinced me that slavery was wrong—radically wrong."  Key was a founding member and active leader of the American Colonization Society whose primary goal was to send free blacks back to Africa.

As an amateur poet, Key was able to change a narrative on events from the night before with a morning after reality, “the flag was still there.”  His reflection of “whose broad stripes and bright stars”  perhaps overshadowed realities of who, why and what was going on aboard the HMS Tonnant.  His observation that, “the flag was still there”  has inspired Americans from every generation and culture to stand together in “the land of the free and the home of the brave.”

Yet, most Americans are not familiar with the second through fourth verses of our national anthem.  The lyrics include:


No refuge could save the hireling and slave
From the terror of flight, or the gloom of the grave:
And the star-spangled banner in triumph doth wave
O’er the land of the free and the home of the brave!

A Global Economic Security Strategy will unlikely heal the hurt from today’s health and cultural pandemics.   A broader commitment to solutions might render government sanctioned  lynching  and other deplorable acts as unacceptable American values.