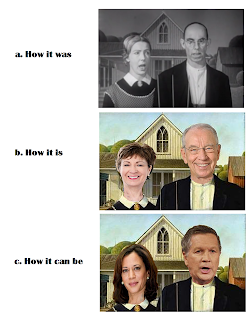 AMWS, October 12, 2018, America – When you vote, will you vote for a who, a what or a when?  It’s an important factor to consider when politics of the past preclude people in the present from producing inclusive policy for the future.  If this sounds familiar, America, it’s because #WeThePeople have been there and done that back…in the “Good Ole days.”

In the YouthUSA Corporate Village, economic inclusion is an absolute right and responsibility of every economic beneficiary.  In 1999, one nonprofit tested an inclusive vision of America’s future on Generation X participants at The American Mentor Summit in Washington, DC.  The charity invited qualifying youth to assess their goals and determine how existing corporate assets should be prioritized, allocated, and distributed.

Not surprisingly, the young folks voted to divide allocated corporate assets among themselves, excluding those beneficiaries not in physical attendance.  No vote emerged on ways and means to sustain the organization for future generations of beneficiaries. As a lesson-learned, the YouthUSA brand, supported by Youth Achievers USA Institute, a 501c3 public charity, promotes economic inclusion for economically disadvantaged American children within its shared vision of America’s future.

This week marks the “discovery of America,” often memorizing -- “in 1492, Columbus sailed the ocean blue.”  But an emerging generation of new voters are exploring facts beyond lessons learned back in the “good ole days.”   According to historical sources, on August 3, 1492, Christopher Columbus set sail from Palos, Spain, with three small ships, the Santa Maria, the Pinta, and the Nina. On October 12, the expedition reached land, probably Watling Island in the Bahamas.  Later that month, Columbus sighted Cuba, which he thought was mainland China.

AMWS, a reporting asset of YouthUSA, invites America’s newest voters to put a 21st Century face on the future.  We’ll want to replace divisive debates with constructive engagement.  Pick any two Americans for your 2020 Presidential ticket, write your goals and any facts about your candidates.  But, we urge you not to pick Mickey Mouse, Donald Duck, or other fictional or deceased individuals like so many 2016 voters did in protest.  To get started, complete steps 1, 2, and 3 at www.YouthUSA.net

The inalienable right to economic inclusion has been challenged at various levels of government by politicians elected to serve the needs of a nation’s most vulnerable citizens.  This week, the reality of economic inclusion hit home.  Yesterday, I got a $402.00 bill from the U.S. Government for Medicare Part B premiums.  Before now, insurance supplemented by the Defense Department, addressed all the healthcare needs of this retired veteran of the U.S. Armed Forces.  The U.S. Government set a due date for payment in full within two weeks.

My lovely bride of 24 years, endeavoring to extinguish a potentially combustible concern, said, “no problem, just pay it.”   This “what” is better known as “affordable healthcare.”  It is second only to the “what” we know as the inalienable right to vote. “Healthcare is complicated…who knew?” stated one elected official.  Just imagine getting a bill from the government for benefits you thought you had earned.  Or, losing a benefit you fought for, and paid for, only to lose that right before you could use it when needed.

I asked a Democrat or two the “who” question--Donald Trump or anybody else?  Does the response, “Anybody else,” qualify as an “exact match?”  I asked a patriotically practical Republican the same question.  The fiscal conservative quickly pivoted from a common sense “who” to a “what,” further complicated by an unspoken agenda of arriving at a “how much.”  Depending on your perception of truth, political perversions are producing anything but an “exact match” to what is right, and what is wrong.

Healthcare is complicated.  But, voting for fiscally responsible governance and against traditional conservative nationalism presents an unfortunate and perhaps untimely dilemma.  A socially sensitive hybrid of fiscal conservative voters will carve out their own truth with their Election 2018 choices.  But, they’ll need to cut through the hyperbole to discover deficits in the folks once trusted by previous generations…back in “the good ole days.”   Perhaps all are better served by pivoting the collective perspective from the elected to the electorate.

As such, the U.S. Census is perhaps the best place to profile the “who” in the American electorate. U.S. Census reports on voting rates have historically varied according to age, with older Americans generally voting at higher rates than younger Americans.  This is one of many factors profiling the “who,” but it cuts with a double edge when you consider the importance of economic inclusion for American youth.

In 2016, young voters ages 18 to 29 were the only age group to report increased turnout compared to 2012, with a reported turnout increase of 1.1 percent.   Labeled “Generation Z,” these new voters make-up one-quarter of America's population, making their generation larger than baby boomers or Millennials.   A 2018 report from Pew Research Center defines these "Post-Millennials" as having been born from 1997 onward.  This hard date on the American calendar presents a point of reference for "key political, economic and social factors", including the September 11th terrorist attacks and the Barack Obama presidency.

Building on their tech-savvy Gen Y predecessors, and Gen X independent-thinking entrepreneurs, observers view Gen Z as motivated by social rewards, mentorship, and constant feedback. They also appear to want meaningful work and be given responsibility.  Like their predecessors, they also tend to demand flexible schedules.

Asked to consider policies of the present and their potential impact on the future, the Gen Z response might weigh the who against what they do.  Is Republican candidate Brian Kemp “cheating his way to Governor of Georgia by suppressing Black voter rights?” This question may draw one response from change enthusiasts and another from traditionalists.

Somewhere in the middle, is that socially sensitive Gen Z conservative weighing a truth between the who and what they do.  Access to information may prove to distinguish Gen Z voters from an aging generation of “traditionalists,” born between 1928 and 1945.  The older voters have proven to be extremely loyal to what they believe, and they enjoy being respected for that.

Young voters can search for an “exact match” to Georgia’s July 15, 1870 vision of its own future.  During and since the 1800s, politics has followed patterns of behavior to preserve traditional values in Georgia and elsewhere.  The Reconstruction era was the period from 1863 to 1877 in American history.  Today’s voters will need to discern right and wrong from three Post-Civil War visions.  History reveals a reconciliation vision, rooted in coping with the death and devastation from the war; a white supremacy vision, which included terror and violence; and, an emancipation vision, which sought full freedom, citizenship, and Constitutional equality for African Americans.

Georgia never elected an African American to the U.S. Senate.  Until now, no state has ever elected an African American woman to be its governor.  Gen Z will need a few facts from history to make the right choice.  These same young voters will need to hold accountable a politically-polarized United States Supreme Court, bequeathed to them by generations of emotional, lesser informed elders.  That court may eventually hear a case of voter disenfranchisement in the last state to be restored to the United States following the Civil War.
That historic U.S. Supreme Court case will need to consider a history of disenfranchisement dating back 1870 to 1871.  During Reconstruction, Hiram Rhodes Revels became the first African American to ever serve as a U.S. Senator.  The list of African American senators has since added four Republicans and five Democrats.   Rhodes, a minister in the African Methodist Episcopal Church (AME), was born a free person in North Carolina.  Before the Civil War, he lived, worked and voted in Ohio.

In 1877, not long after Reconstruction ended, white Democrats regained power in the state legislature. They passed a poll tax which disenfranchised many poor blacks and whites, preventing them from registering to vote.  In 1908, Georgia established a white primary; with the only competitive contests within the Democratic Party.  This was another way to exclude blacks from politics.  Blacks constituted 46.7% of the state's population in 1900, but the proportion of Georgia's population that was African American dropped thereafter to 28%.  During the Great Migration, tens of thousands of families left Georgia, fleeing one of three post-Civil War visions of Georgia’s future.  Political disfranchisement persisted through the mid-1960s, until after Congress passed the Voting Rights Act of 1965.

Designed to enforce the voting rights guaranteed by the Fourteenth and Fifteenth Amendments to the United States Constitution, the Voting Rights Act secured the right to vote for racial minorities throughout the country, especially in the South. According to the U.S. Department of Justice, the Act is considered to be the most effective piece of federal civil rights legislation ever enacted in the country.

On June 25, 2013, the U.S. Supreme Court, in Shelby County v. Holder ruled by a 5-to-4 vote that Section 4(b) of the Voting Rights Act is unconstitutional.  A majority of the court said the coverage formula is based on data over 40 years old, making it “no longer responsive to current needs and therefore an impermissible burden on the constitutional principles of federalism and equal sovereignty of the states.” The Court did not strike down Section 5, but without Section 4(b), no jurisdiction will be subject to Section 5 preclearance unless Congress enacts a new coverage formula.
Five years after the Supreme Court ruling, nearly a thousand polling places have been closed in the United States.  Many of the closed polling places are in or near predominantly African-American counties. Research shows that the changing of voter locations and reduction in voting locations can reduce voter turnout.

If the diabolical plot still lacks clarity, perhaps history will reveal truths lost in political power plays.  New voters in 2018 and beyond will need to bring their "A Game"  to break the historic cycle of veiled exclusion.