Why Every 1 in 6 Million Ohioans Need To Vote Early 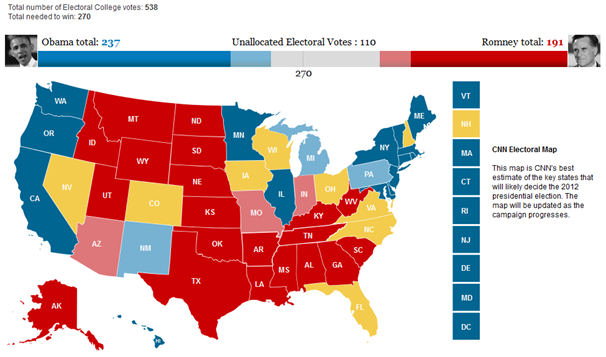 AMWS, October 21, 2012, Cleveland, OH – The State of Ohio reported that 1.4 million Ohioans have either cast or requested an absentee ballot for the November 6 General Election. The Ohio Secretary of State’s website now informs the last of 7.9 million Ohio voters WHERE they can go for early voting.

Ohio Secretary of State Jon Husted’s “encouragement” could have been a little more enthusiastic since voting is one of those inalienable rights celebrated through American citizenship. Instead, regarding the U.S. Supreme Court’s denial of a stay of the Sixth Circuit Court of Appeals’ decision in Obama v. Husted, the Secretary told Ohioans, “Despite the Court’s decision today, to deny our request for a stay, I firmly believe Ohio and its elected legislature should set the rules with respect to elections in Ohio, and not the federal court system.”

If you are one of the 6.5 million Ohioans who have not voted, you should vote:

If you do not vote on one of these days, it is imperative, RAIN, SNOW or SHINE that you cast your ballot on November 6. You may need to call the Secretary of State for information on where to vote. His number is 877-767-6446.

Despite all our individual and collective efforts, too many eligible voters won’t get the word unless one connected somebody visits, calls, or emails a friend and tell them what needs to be done and why. Some are still waiting for the last hour on Tuesday, November 6 to arrive at the polls just in time to be disenfranchised.

The “issue” for about 11,544,951 Americans who live, work and worship here is about trust. It’s about shaking loose from shackles that keep you and others like you poor, stupid and locked up.

If every Ohioan could vote in the November 6 election for president, 5,887,925 would count as a 51% majority for 4% of the total U.S. population. Perhaps a simpler formula might be to divide four in half and get a 2% majority of a minority that only counts on Election Day. Being counted in the minority has been a major part of the problem across the U.S – even in Ohio.

U.S. foreign policy is impacted by American interests. How “We The People” participate in democracy pretty much paints the picture for the global village. Both contestants in tonight’s third and final debate have been tripping over each other to get to Ohio. There’s an historic American institution called The Electoral College. It has no campus and no scheduled classes, but its math counts in presidential elections.

There’s yet another historic institution that neither candidate for president wants to consider in a national security debate. That institution, established in perpetuity in 1712 today answers the “why” 12% of Ohioans must vote.

African Americans were among the first residents of Ohio. Most of these people were free, but undoubtedly, a small number of them were slaves. Ohio's first constitution, the Ohio Constitution of 1803, outlawed slavery. Despite this legal protection, African Americans faced much racism and discrimination in the state.

The state constitutional convention prohibited African-American men from voting. Black men and women could not serve in the militia, serve on juries, testify in court against whites, receive assistance at the "poor house," vote, or send their children to public schools. Many whites actively sought to prevent blacks from coming to Ohio, fearing a loss of jobs to African-American workers. Many white Ohioans were also racists. Despite the discrimination that African Americans endured, many black Ohioans favored life in Ohio rather than living as slaves in the South.

Over time, conditions for African Americans improved in Ohio. During the nineteenth century, many whites actively assisted slaves in escaping from their owners along the Underground Railroad. Many of these same whites called for the Ohio government to extend equal rights to African Americans. During the twentieth century, especially during the 1950s, 1960s, and 1970s, the Civil Rights Movement raged, with both blacks and many whites seeking equality for people of all races.