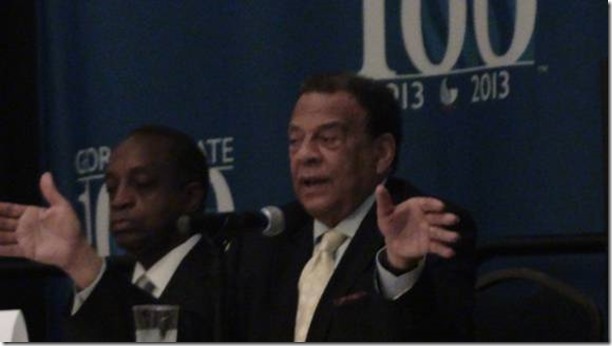 AMWS, May 23, 2013, Atlanta -- As a seminarian, Ambassador Andrew Young studied the teachings of Mohandas Gandhi. He became certain it was possible to change society without violence. He also grew convinced that civil rights could best be achieved through politics. No investor in Young’s positive youth development envisioned him as a liability in a minus $16 trillion national economy. “The transfer of wealth and values is through the family,” said Young. “If you do not understand capital and capitalism, you are a slave.”

A Call To Action, facilitated by the Administration for Children and Families in partnership with The Andrew Young School of Policy Studies, focused on the need to forge partnerships in support of family resilience. The policy shift from a social justice quagmire to an “intentional, pro-social approach for engaging American children in their own futures,” presents new opportunities for framing an inclusive national security mission.

“One of our greatest challenges is getting adults to work together for the benefit of our children,” said Michael Thurmond, interim Dekalb County, GA School Superintendent.

One mission concept is already formatted in a 2-hour mass media program and a 6-year old national campaign. The television program airs daily on HLN to raise awareness of issues affecting parenting in America. Anchor Kyra Phillips covers the nation's major news stories and explores more deeply how they relate to home, children and modern families.

The premise of the television program, “It takes a village to raise a child,” also identifies a community-based structure for sustainable, task-organized, homeland security operations. In a spirit of promoting win-win partnerships, Youth Achievers USA Institute adds to that premise, “It takes a whole village to raise a child.” A “Whole Village” is organized, equipped, and funded to meet the spiritual, physical, social, financial, educational, professional and recreational needs of an American child.

“No dream of a beloved community can endure the reality of a cradle to prison economy,” said Stephanie A. Walker Stradford, CEO, Youth Achievers USA Institute. “We cannot expect a profitable return on investment by investing negative value in negative behavior.” A partnership between HLN and Administration For Children and Families could add policy and practice to the promotion of “Raising America.” But the road from research and information sharing to policy and action will require a broader vision of inclusive economic security.

The Children’s Defense Fund, a non-profit child advocacy organization, has worked for 40 years to ensure a level playing field for all children. CDF champions policies and programs that lift children out of poverty; protect them from abuse and neglect; and ensure their access to health care, quality education and a moral and spiritual foundation.

According to CDF, 1 in 3 Black and 1 in 6 Latino boys born in 2001 are at risk of imprisonment during their lifetime. While boys are five times as likely to be incarcerated as girls, there are also a significant number of girls in the juvenile justice system. This rate of incarceration is endangering children at younger and younger ages.

This threat on American lives is known to advocates as America's pipeline to prison — a trajectory that leads to marginalized lives, imprisonment, and often premature death. Although the majority of fourth graders cannot read at grade level, states spend about three times as much money per prisoner as per public school pupil.

YouthUSA values each child as a “community asset” with 7-part vision of his or her own future. A free online application to THE ANNUAL YOUTH ACHIEVEMENT AWARDS invites any family, local church, sorority chapter, fraternity chapter, or community organization to join a national call to mobilize America from research to practice. There has never been a shortage of resources in “One Nation Under God,” just resourcefulness. 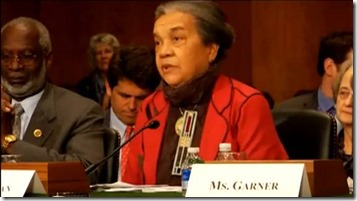 The hearing entitled, "The State of the American Child: Securing Our Children's Future", brought together a distinguished panel of witnesses to testify on the dire state of our children during these difficult economic times and how citizens and lawmakers must act now to secure our children's future and our nation's future. Others on the panel included, Helen Blank, Director of Leadership and Public Policy for the National Women's Law Center, Dr. Michael Casserly, Executive Director of the Council on Great City Schools, Peter Edelman , Professor of Law, Georgetown Law Center and Faculty Co-Director, Georgetown Center on Poverty, Inequality, and Public Policy, Jennifer Garner, Artist Ambassador, Save the Children and Dr. David Satcher, Director, The Satcher Health Leadership Institute and Center of Excellence on Health Disparities, Morehouse School of Medicine.

From Information to Operation with Video on TheEnterpriZe Channel

The Marietta-Roswell Alumnae Chapter of Delta Sigma Theta Sorority, Inc. put words to work in hosting their Fourth Annual Community Empowerment Summit. According to Cobb SCLC Chair, Dr. Cheryl Graves, “Delta’s here have been working to empower communities through awareness, advocacy, and action. Cobb SCLC is eager to forge partnerships.” The Delta’s focus on issues such as preserving the value of your home, improving your credit, and finding a job are fueling cooperative community strategies and igniting win-win partnerships.

Janice Mathis, Esq., a keynote speaker for this year’s Community Empowerment Summit, talks the talk for transforming rhetoric to reality. As Community Affairs Host on WAOK-AM/WXAG-AM/WVEE-FM, Mathis is no stranger to community needs. She walks the walk as Vice President of Legal Affairs for Rainbow PUSH – Atlanta, and as a member of Delta Sigma Theta Sorority, Inc.’s National Social Action Commission.

The Summit, designed to “move the community toward stability and growth,” will need to engage Mathis and other advocates more frequently to ensure goals and visions become measurable programmatic reality. “The goal is to empower the underserved in the community, particularly, during times of economic crisis and instability,” said Patsy A. Pattman, president of Marietta-Roswell Alumnae Chapter of Delta Sigma Theta Sorority, Inc. Pattman has presided over the enterprising chapter for the last four years.

First Vice President Wilma Z. Davis is the chapter’s president-elect. Davis’ experience in developing and managing community programs identifies a key community asset for operating in decency and order.
The movement from information to operation will require unprecedented cooperation within and beyond partnering organizations. “We must further explore the concept that empowerment of all key players is necessary to stabilize growth,” said Davis.

The evolution from information to operation will need to build on the understanding of credit scoring systems and actually improve credit scores at the same time. Chapter member Patricia Mack, an investment specialist at PNC Bank, brings a wealth of experience and resources to address long-term economic challenges.

As a member of the Marietta Roswell Alumnae Chapter (MRAC) of Delta Sigma Theta Sorority, Inc., Mack and others will need to consider innovative economic programs to create significant positive impact in the Cobb, Cherokee, and North Fulton counties. Some key areas for economic program development include:

Valuing our youth, fostering economic empowerment among families and businesses, qualifying community members to purchase a home and/or preserve its value in today’s economy, and identifying actual revenue generating opportunities to include jobs.

Deltas have been empowering women to empower their communities for 100 years. Founded on January 13, 1913 by twenty-two collegiate women at Howard University, Delta Sigma Theta Sorority, Inc. is a private, non-profit organization whose purpose is to provide assistance and support through established programs in local communities throughout the world.

A sisterhood of more than 200,000 predominately Black college educated women, the Sorority currently has over 900 chapters located in the United States, England, Japan (Tokyo and Okinawa), Germany, the Virgin Islands, Bermuda, the Bahamas and the Republic of Korea.

To learn more, go to www.dstmrac.com