How The Black Church Survives Pandemic

AMWS, April 22, 2021, Muscogee –  For whatever reason, some “good people” seeking to heal from COVID-19 tend to value other “good people” as less than equal.  The term, “minority” so freely and habitually woven into our beliefs, reveals a remnant cause of a deadly effect on American lives.

Experience as equals among brother and sister warriors of all races uniquely equips veterans of the United States Armed Forces for service in the national defense.  Those who were raised in Black Church augmented military discipline with an inherent value of “double portions.”  But, too often, they return to hometowns that once seemed so big to a hometown mindset that’s just too small to “provide for the common defence.”

May 31, 2021 marks the 100th year since terrorists attacked the Greenwood community of Tulsa, Oklahoma.   The attack on that community, dubbed “Black Wall Street,” was perhaps as unimaginable as the senseless murder of George Floyd.  And yet, almost no one will imagine the 121 old story sleeping beneath the sheets.

If anybody needs to be blamed for the wake-up call, it’s Eric C. Nelson.  The attorney for now convicted murderer Derek Chauvin impregnated an emerging global generation of jurists with an unacceptable version of reality.  Nelson’s attempt to exploit the last 9 minute 29 seconds on George Floyd’s Chronos timeline may have triggered a reset from Chronos to Kairos.

The Reverend Dr. Robert Richard Allen Turner pastors the Historic Vernon African Methodist Episcopal Church in the Greenwood community.  He has been pounding the pavement at City Hall seeking reparations for the 100-year-old attack on Black Wall Street.  In his generation, a Black Lives Matter movement trods the stony road of social justice, paved with blood of folks who said they believe that “trouble don’t last always.”

Planners for The First Quadrennial Session of the General Conference of Meeples have been looking at “church” through a whole new generation of eyes.  What started as intentional, prosocial action in pursuit of “economic justice” for Black Lives across America has inspired a declaration for #EconomicSecurity.

The difference between “economic justice” and #EconomicSecurity is that one is granted by those with perceived power and the other is decreed and declared through sovereign authority.  #ManifestDestiny was a widely held cultural belief in the 19th-century United States that American settlers were destined to expand across North America. The current #EconomicSecurity reality for historically disadvantaged Americans stems from three basic themes of manifest destiny.

Social action by “good people” has promoted “special virtues of the American people and their institutions.”  The concept, according to historians was born out of "a sense of mission.”  A perception of mission for the United States was to redeem and remake the west in the image of the agrarian East.

Survival for a growing number of #BlackLivesMatter supporters now drives an “irresistible destiny to accomplish an essential duty.”  Before COVID-19, there was already a racial-wealth gap, and this pandemic has exacerbated it,” states BLM. “Since the beginning of the pandemic, the United States government has never done enough to support Black people, leaving too many in survival mode.”

HEALING THE SOUL OF AMERICA justifies compromise on $2 trillion in U.S. government infrastructure spending.  The clarion call for healing frames a news cycle around an anticipated Kairos moment on a Chronos timeline.   Journalists, broadcasters, public relations practitioners, preachers, teachers, advertising executives and every beneficiary of a minority anything may qualify for credentials to right an historic wrong by writing the story of how America’s soul got healed.

“How To Reach The Masses” is one question on the minds of 2.4 billion believers.  Good people across “the nation” and around the world are sick and tired of being sick and tired. Good news is, there is a balm.

The Black Church was “born in protest against slavery – against dehumanization of African people, brought to the American continent as labor,” according to The Right Reverend Adam J. Richardson, senior bishop of the African Methodist Episcopal Church, Inc.  The Black Church was unique in that, “It rejected the negative theological interpretations which rendered persons of African descent second class citizens,” stated Richardson. “Theirs was a theological declaration that God is God all the time and for every body.”   Let’s be real. Not every body trusts the government.  Perhaps that’s why “Everybody” hasn’t gotten a COVID-19 shot.

A. J. Richardson is the 115th elected, consecrated bishop of a unique body of believers in 39 countries on five continents.  The terms, “every” and “body” does not necessarily mean the same as “everybody.” The Black church, regardless of denomination, carries out the spirit of the original Free African Society which values any “body” as a whole “somebody.”

Common vision for the future of Black Wall Street, Tulsa, OK means understanding provisions for #EconomicSecurity.  A “Meeple of Muscogee” may have been a vision of a whole “somebody” once valued as a minority.

By declaration, the constitution of the Muscogee (Creek) Nation, provides for a new reality in Tulsa, and perhaps a cornerstone for a 21st Century community of whole believers.  “Under the guidance of the Almighty God, our Creator, #WeThePeople of Muscogee, do promote Unity, to establish Justice, and secure to ourselves and our children the blessings of Freedom, to preserve our basic Rights and Heritage, to strengthen and preserve self and local Government, in continued relations with the United States of America, do ordain and establish this Constitution for the Muscogee (Creek) Nation. 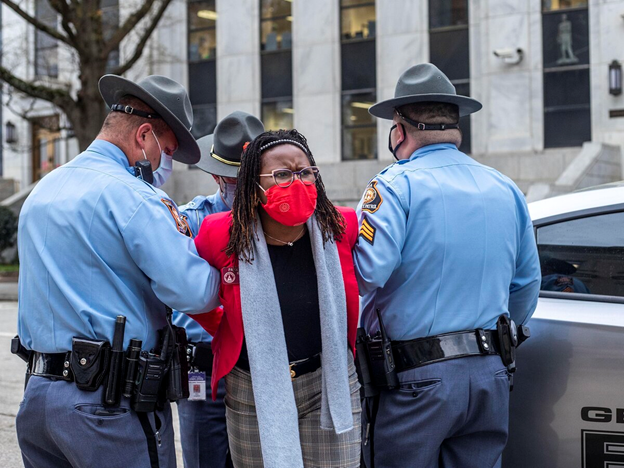 As Delta, Coca Cola and CEOs from more than 100 brands blast Georgia's 'unacceptable' voting law –, activists, including elected officials are knocking on statehouse doors.  Georgia State Representative Park Cannon was arrested after she attempted to knock on the door of Gov. Brian Kemp's office during his remarks after signing into law a sweeping Republican-sponsored overhaul of state elections. Alyssa Pointer/Atlanta Journal-Constitution via AP

Fifty days out from a credible threat to business as usual, the Biden administration is digging in on HEALING THE SOUL OF AMERICA.  Over the last three days, voter suppression tactics in the state once known as Georgia, rattled economic leaders to a point of “Destroying the temple, and raising it up three days later.”

Well Georgia, yesterday was day three--Fifty days out from a predictable transformation for #WeThePeople.  Over the weekend, voter suppression tactics enraged believers to new levels of intolerance.  A shot heard across “the nation”, echoed by media reports, signals a credible threat to America’s economic security. Obstructionists have proposed 250 copycat bills across 43 states.

RESSURECTION DAY AMERICA. Yesterday’s #GoodNews reports the beginning of a new era for “one nation under God.”  The contract that crowned “thy good with bother hood from sea to shining sea” is up for renegotiation.”  Judgement day for bad blood hinges on the faith and good works of 2.4 billion believers around the world.

The multi-trillion dollar appetite for spending other people’s money is the first of many procedures planned for #HealingAmerica.  On RESURRECTION SUNDAY, #WeThePeople moved to end #filabustin by decreeing and declaring it not a law and not a real word in the new lexicon for governing.  It has no meaning to Generation Alpha and, therefore, no redeemable value in “one nation under God.” 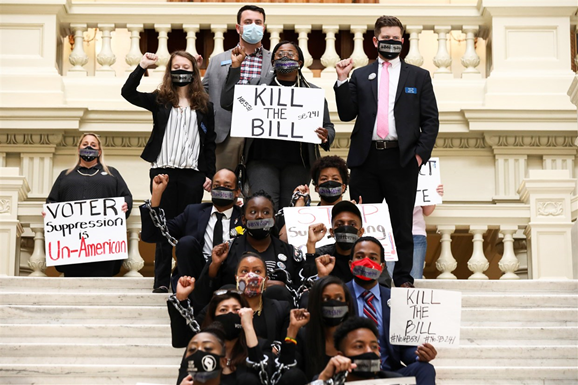 In the real world, words mattered.  Bad words got your mouth washed out.  “My grandmother washed dirty clothes, and, sometimes bad words from children’s mouths, with nasty soap,” recalled Stephanie A. Walker Stradford.  The key ingredient to the Fels Naptha soap brand was a flammable liquid hydrocarbon mixture.  Naphtha made the soap effective for cleaning laundry and removing the allergen urushiol in poison ivy. But it was removed from the soap as a cancer risk.

While waiting for the cure from COVID-19, Generation Alpha has been learning about hand washing and reparations.  Purex, a popular brand for hand sanitizer was never intended for human consumption, even though a former president suggested such an approach.  Economically, in 1964, Fels-Naptha, the Philadelphia manufacturer for the brown soap, was sold to Purex Corporation for $5 million.   In 1985, the Greyhound Corporation acquired the consumer products business of Purex (which included Fels-Naptha) and combined it with Greyhound's Armour-Dial division, forming The Dial Corporation.  In December 2003, Dial was sold to Henkel for $2.9 billion.

Over the last 100 years, as money moved from one brand to another, injustices such as the Black Wall Street riot have stood unresolved, unforgotten, unforgiven and unrepaired.  But the violent race war of May 31 and June 1, 1921, was not unprecedented in American history.

Under authority of #ManifestDestiny, the vote for 100 current U.S. Senators may need to be suppressed.  This new suppression rule might require a simple majority. It would challenge the rights of U.S. Senators from the state of Oklahoma to vote.  Last year, the United States Supreme Court ruled in McGirt v Oklahoma that the United States should keep its promise to the sovereign Muscogee (Creek) Nation.  Perhaps as a compromise, one of two Oklahoma senate seats might move to the District of Columbia.

The Supreme Court’s next move might be to retroactively rule Public Law 21-148 unconstitutional.  In 1790, U.S. Secretary of War Henry Knox, in the administration of President George Washington, brokered The Treaty of New York between leaders of the “Creek” people.  Knox had once owned and operated a bookstore in Boston, Massachusetts.  But he exhibited no evidence of literacy on the sovereign Muscogee Nation in brokering the deal for Georgia, Alabama and Oklahoma.

A course in Muscogee culture might have altered the course of American history.  Reality about what happened and when may offer future leaders a second chance to get things right.  If the COVID-19 taught anybody anything, it might be “patient investing.”