AMWS, September 27, 2012, Marietta, GA – Life Science Learners at Marietta Middle School caught a glimpse of their own value as economic stimulus. A majority of the students in Justin Waller’s class already know they are winners.

Through a joint effort of the Cobb County Chamber of Commerce and Youth Achievers USA Institute, they learned today of a value-added link between their school studies and their future value in the American workforce. Any one of the winners in today’s classroom can pursue careers in pathology, genetics, or reproductive science. These three paths offer countless career choices in an economy of innovation.

Mr. Waller adds value to a vision of the winners’ future as an “educational ambassador” for Marietta City Schools. As Marietta School System’s Teacher of the Year, he advocates for the school system and its students. Citizens who earn the Teacher of the Year title are “exceptionally dedicated, knowledgeable, and skilled” according to the program website.

The teacher’s individual capacity to learn drew increased interest from school administrators, the Chamber of Commerce, and Youth Achievers USA Institute, a national public charity promoting American youth as future community assets. The teacher inspired students of all backgrounds and abilities to learn, showed respect and admiration of students and colleagues, and added value to the community as well as the school.

Both students and the visiting Teacher of the Day can tell you that Mr. Waller is a gifted scientist. He earned an education degree at Kennesaw State University after realizing he wanted to do more for his community. Among his accomplishments are the construction of an outdoor classroom which includes two greenhouses, a rose garden, benches, two flower boxes, and leading a "Go Green" club that picks up recyclable materials at least twice a week.

Today, seventh graders learned that life science is any science that deals with living organisms, their life processes, and their interrelationships as biology, medicine, or ecology. Basically, they learned about their own body systems by dissecting a frog.

Tomorrow, they must decide on their own path toward economic security. Lessons learned in S.T.E.M. and a community’s commitment to Positive Youth Development will ensure a path paved with opportunity.

Caring adults interested in stimulating the economy though investment on Our Streets, USA can CLICK HERE TO ENGAGE in Learn-2-Earn.

Stimulus for Our Street, USA

AMWS, Washington, DC, Sept. 24, 2012 -- There’s a new stimulus for the American economy. It’s just over the horizon, but close enough for investors to bank on its future value. Before now, innovation economics has been another buzz word for the impossible dream. The plan for ending two wars, tackling defense spending, bailing out Wall Street, and Detroit has transparently matriculated before our very eyes. As Congress recessed from recess today, the Congressional Black Caucus Foundation shared a vision of America’s future. 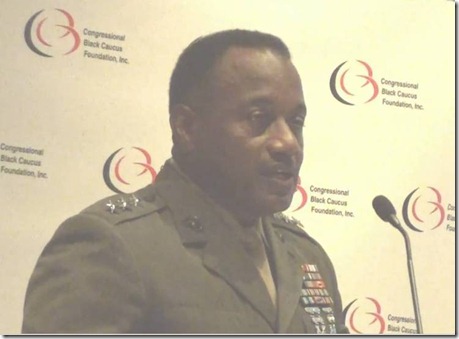 Marine Corps Lieutenant General Willie J. Williams factored in the reality of a downsized military force and the impact of trained veterans returning to Our Street, USA. In the past, African American communities have received veterans with some hesitation. “After leaving the Marine Corps, I shared some news with schools, faith and community leaders about the Internet,” said one veteran. “They looked at me like I was crazy. When I started telling them about how this could impact their economic reality, some looked like a deer in the headlights of oncoming traffic.”

The 42nd Annual Legislative Conference, dubbed ALC 2012, highlights the CBCF mission to “develop leaders, inform policy and to educate the public.” Conference participants heard about a digital divide that’s been with us since Vice President Al Gore allegedly “invented” the Internet. Some of the key issue forums and brain trusts touched on real problems faced by a constituency of historically disadvantaged Americans. But other conversations just fed into bad habits among broad sectors of the African American Community. “You know who frustrates the so-called "blue dog" Democrat -- who block President Obama in the name of fiscal responsibility. Do they know that they are hindering economic recovery?” posted economist, author, and commentator. Dr. Julianne Malveaux,

Dr. Malveaux and other informed conventioneers seeking substance in a slew of rhetorical theorizing already see the light at the end of a divisive election. With no legitimate opponent left standing, Barack Obama wins by default. Never before in American history has a divisive contest produced such a possibility for a political win-win. Skipping past scheduled debates, the possibility of another questionable election and right to Mitt Romney’s succession speech promotes one short path to common vision for America’s future.

Right now, the shortest distance between the $16 trillion national debt and economic recovery is a straight line. Or, for the sake of debate -- a line segment, connecting point A to point B. The classic answer in mathematics, underscores Arkansan wisdom from former President Bill Clinton. Mr. Clinton reminded America, the economy comes down to arithmetic. That holds true for elections as well as governing after elections. America works best when citizens engage and support their collective decisions.

The math is far more significant for men and women of the U.S. Armed Forces. A majority of voters elect the president. A majority in Congress appropriates public funds. A majority of veterans follow orders in defense of national security. A change in policy resulting in reduced combat forces means an increase in veterans returning home. High unemployment rates among veterans reflect an America’s failure. If a veteran fights for us over there, we should fight for you over here. However, the more trained veterans in the workforce, the more first-jobbers get laid off.

Like Mr. Clinton said, it’s arithmetic. Moving forward with investment in human capital is essential if America is to be strong in both the public and private sectors. Our future depends on it!