AN OPEN LETTER FROM AMERICA’S FUTURE

For The Council of Bishops, The African Methodist Episcopal Church 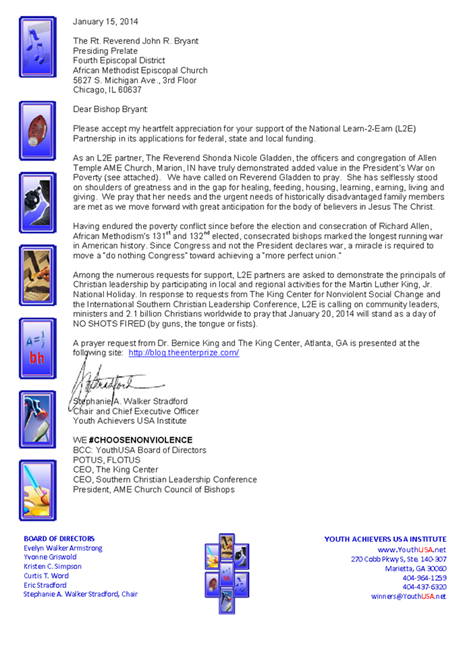 There is a balm for “Gilead,” but is America ready to be blessed? 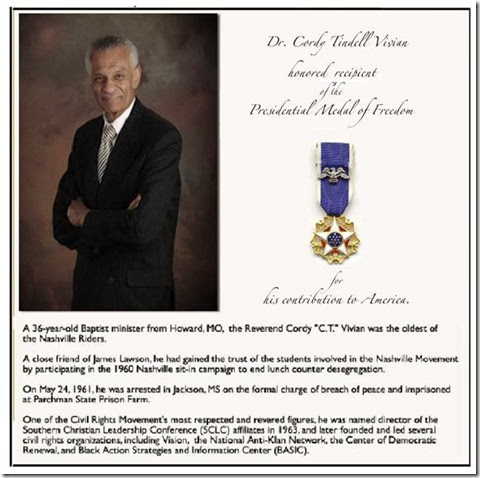 AMWS, Jan 11, 2014 -- The president and chief executive officer for the historic Southern Christian Leadership Conference (SCLC) has stepped up to a higher calling. The Reverend Dr. Cordy Tindell “C.T.” Vivian, awarded a 2013 Presidential Medal of Freedom by President Barack Obama, is leveraging national recognition to counter centuries of historical struggles to “Raise America.”

President Emeritus Charles Steele, Jr. has returned to the SCLC helm to steward Vivian’s new Southern Christian Leadership brand. “SCLC is building on the past through an inclusive vision of America’s future,” said Steele. Dr. Vivian stepped up to restore faith and trust in “Southern Christian Leadership” -- an intervention for what Dr. King envisioned for a “more perfect union.” Vivian is now calling on fellow Medal of Freedom recipients to address one unfulfilled action in The Reverend Dr. Martin Luther King’s dream.

In response to an overwhelming outcry for economic security, this week, the Obama Administration declared unconditional war on poverty in America. The administration is hoping to build on President Lyndon B. Johnson’s response to the 1963 March on Washington, sources say. The 50 year old strategy set in motion a series of reforms that “led to a dramatic rethinking of the nation's social dynamics and a reinforcement of the foundational promises of equality and opportunity for all Americans.”

The Reverend Dr. Bernice A. King, Chief Executive Officer, The Martin Luther King, Jr. Center for Nonviolent Social Change, is hoping the Obama Administration will consider the interventions that inspired President Johnson’s activism. The 21st century nonviolent movement calls on local, state and national leaders to PAY ATTENTION. During the 50th Anniversary of the March on Washington in August 2013, the youngest of King’s children tapped into the content of her own character to RAISE AMERICA.

Taking the first step in a global march, Bernice A. King called on Beloved Community to #choosenonviolence as an uncompromising method for sustainable, forward movement. On January 20, Southern Christian Leadership will look to 2.1 billion Christians worldwide for fervent prayer that the national Martin Luther King Jr. holiday is celebrated as a day of “NO SHOTS FIRED. 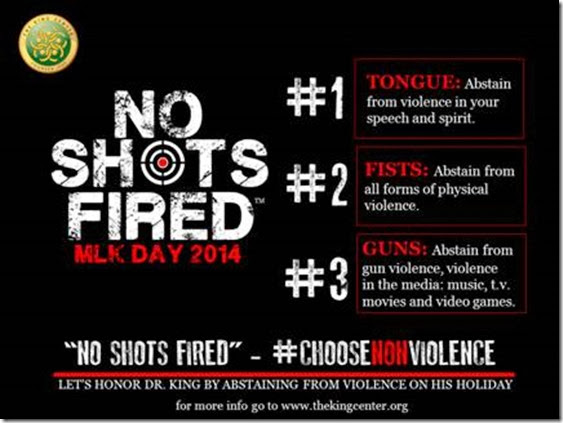 The CEOs of The Southern Christian Leadership Conference, The King Center and Youth Achievers USA Institute (YouthUSA) are engaging diverse constituencies by building capacity around seven (7) pillars of national service. Quoting from her father’s book, Where Do We Go From Here: Chaos or Community?, the youngest King drew from her own positive youth development to discover, “we are the ones we’ve been waiting for to transform this nation into its best possible self.”

Healing within the beloved community is a necessary step toward healing America. As an intervention, “Southern Christian Leadership is defined by our evidence-based approach to doing something for others,” said Steele. “The critical need for healing, feeding, housing, learning, earning, living and giving compels SCLC to identify and implement best practices. Like Dr. King, we must continue to reinvest in our own value-added economy as justice-obsessed, biblically shaped, spokespersons for the poor,” he added.

The question, “Where do we go from here?” has now become a focal point for substantive strategic planning. SCLC has called on national strategists Dr. H. Ben Williams and Stephanie A. Walker Stradford to engage chapter members in an inclusive vision of America’s future.

This year’s Leadership Conference (January 24-25, 2014) will be a time of preparation, training and capacity building. SCLC will be equipping its leadership, chapters and affiliates with the program tools and materials needed to advance a very aggressive voter registration campaign in preparation for the 2014 midterm election. They will also be providing their chapter and affiliate leaders with specialized training on national programs and their respective plans of implementation.

“We strongly recommend that all chapter officers attend this most important gathering. During the meeting our board chairman, president/CEO, and other leadership will share a common vision and plan on implementation for 2014,” said Maynard Eaton, SCLC National Communications Director.

At a time when many of the legislative accomplishments of the civil rights movement are being threatened, SCLC remains the moral voice for equity and advancement. Their chapters and affiliates across the globe actively fight disenfranchisement, advocate for fair and equitable wages, and promote equal justice. In preparation for the great work that is before them, SCLC will host this year’s Leadership Conference in the Martin Luther King, Sr. Community Resource Center at Ebenezer Baptist Church in Atlanta, GA.