AMWS, September 11, 2019, United States of America – A constantly expanding gulf of mistrust is proof enough that business as usual needs to become a practice of the past.

Our bank, SunTrust, has been somewhat sluggish on calls for transparency.  We heard they were merging with BB&T.  Now we hear they plan to brand our bank, “Truist.”   Who knows? Next, they may even commit $100 million or more to post-9-11 community reinvestment.

But, before we count the ways to spend pledged funds, #WeThePeople might want to revisit Shakespeare, “To be or not to be?”  Somewhere betwixt the details in a hundred years of bank mergers, a Community Advisory Board will need to explore our bank’s evolving identity and its commitment to post 9-11 #Economic Security.

One pathway to #EconomicSecurity starts with substantive citizen engagement.  The Federal Deposit Insurance Corporation (FDIC) offers #EconomicInclusion as a necessary first step toward achieving post 9-11 community reinvestment. There is no free ride even if #EconomicJustice is the desired outcome.

Congress passed the Community Reinvestment Act (CRA) back in 1977 to end discrimination known as redlining.  It required banks to meet the credit needs of communities where they do business.

According to the National Community Reinvestment Coalition (NCRC), discrimination in lending is still a problem.  NCRC is fighting to defend Public Law 95-128  through citizen action they’ve digitally tagged, #TreasureCRA. 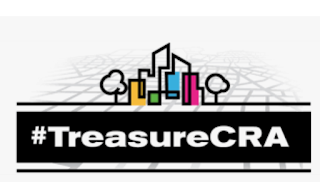 For nearly two decades, post 9-11 survivors have repatriated themselves by decreeing and declaring, “I’m a winner!”  Among them has been a minority group erecting a virtual bridge across an intolerable “digital divide.”  Two-percenters in the YouthUSA Corporate Village of beneficiaries, caring adult stakeholders and elected directors, captured that evidence of things not seen in their faith-based corporate motto, “I believe I can achieve whatever I believe I can achieve.”

THE NATIONAL LEARN-2-EARN CAMPAIGN connects enterprising community members to a Community Advisory Board.  The board is composed of representatives of nonprofit organizations serving low and moderate-income communities.  One shared goal toward #EconomicInclusion might be connecting corporate means to community needs.

YouthUSA program officers have invested time and money in demonstrating #EconomicInclusion for the least among us.  YouthUSA, a SunTrust business banking partner, is growing its first social enterprise business, modeling a shared commitment to communities, affordable housing, small business, and financial wellness.  Lessons learned from past attitudes about minority inclusion are of particular value as bankers pursue public trust around questionable branding.

9-11 is the occasion.  Repatriation of stolen assets is the opportunity for civic engagement. Depending on whether you advocate for Economic Security or Economic Justice, this National Day of Service and Remembrance encourages folks to engage.  Haves and have nots across the country are called on to pay tribute to individuals lost and injured in the attacks, first responders, and the many who have risen in service to defend freedom.

The American Civil Liberties Union (ACLU) points out that defending freedom does not mean sacrificing inalienable rights.  Weeks after the September 11, 2001 attacks, national leaders acted to revise laws about America’s Money-n-the-Bank.  An overnight revision of the nation's surveillance laws “vastly expanded the government's authority to spy on its own citizens, while simultaneously reducing checks and balances on those powers like judicial oversight, public accountability, and the ability to challenge government searches in court,” according to ACLU.

A terrorized 107th United States Congress passed the USA PATRIOT Act to deter and punish terrorist acts in the United States and around the world, and to enhance law enforcement investigatory tools. But, in an era when many protective measures are being watered down, phased out or deregulated, “#WeThePeople are just beginning to realize just how much we lost in the 9-11 terror attack.

“Other purposes,” alluded to in the USA PATRIOT Act, should have strengthened measures to prevent use of the U.S. financial system for personal gain by corrupt officials and facilitate repatriation of stolen assets to citizens whom such assets belong.
Posted by AMWS at 9:45 AM No comments: