Needs of The One 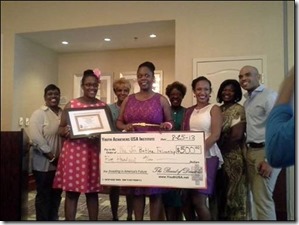 AMWS, August 26, 2013, Atlanta – In the national demonstration for human rights, participants are most likely pressed toward the movement. The media mindset of the past has been to microwave the message for quick and easy consumption, mass marketing Cliffnote summaries to the millions and the millions who might follow them.

But for the 50th Anniversary of the March On Washington, a message is getting through despite some bad habits of the past. Veteran leaders like Dr. C.T. Vivian and The Honorable John Lewis are tapping into endless possibilities for framing collective action by committing themselves to a common vision for America’s Future.

The Reverend Dr. Bernice A. King, Chief Executive Officer for The King Center offered some tangible guidance for moving the movement. In 1963, millions walked away with a common and sustainable reference to the March On Washington. Almost everybody looks back to part of a speech they remember as “I Have A Dream.”

In looking ahead, Bernice A. King is building on a message behind the media blitz of mass movement. The youngest daughter of Martin Luther and Coretta Scott King has taken on the task of servant leadership for the remnant watershed factions of the historic American Civil Rights Movement. Her needs, perhaps inspired by the greatest quote from the 1963 #MarchOnWashington, are today among the most important reasons for the masses to march. “I have a dream that my four little children will one day live in a nation where they will not be judged by the color of their skin, but by the content of their character,” said The Reverend Dr. Martin Luther King, Jr.

As the youngest of three surviving offspring, her message has been simple, elegant and compelling. But, like her father and her mother before her, the message is still being met with unjustifiable resistance. The media can share blame with the masses because her message to herself has been simply, “BE A KING.” The difference made by half a century of growing up as children of the Civil Rights Movement is that everybody needs to be your daddy and your momma. 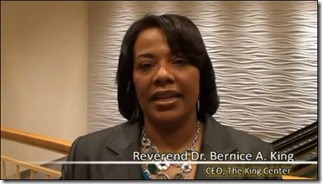 Her simple, humble request is for WE THE PEOPLE to follow some marching orders. Buy and read the book, Where Do We Go from Here: Chaos or Community? by Martin Luther King, Jr.  The 50th Anniversary of the March on Washington holds specifically inspiring significance for B. A. KING. Today, the masses must embrace the humility in the messenger’s enduring message.

Bernice Albertine King (born March 28, 1963) is today an American Baptist minister. She is the second daughter and youngest child of civil rights leaders Dr. Martin Luther King, Jr. and Coretta Scott King. Her older siblings are Martin Luther King III, Dexter Scott King, and the late Yolanda Denise King. Bernice was only five years old when her father died and is the only King child to have become a minister.

Her daddy, Martin Luther King, Jr. (January 15, 1929 – April 4, 1968) was, to most of us, an American clergyman, activist, and leader in the African-American Civil Rights Movement. He is best known for his role in the advancement of civil rights using nonviolent civil disobedience. King has become a national icon in the history of American progressivism.

A Baptist minister, King became a civil rights activist early in his career. He led the 1955 Montgomery Bus Boycott and helped found the Southern Christian Leadership Conference (SCLC) in 1957, serving as its first president. With the SCLC, King led an unsuccessful struggle against segregation in Albany, Georgia, in 1962, and organized nonviolent protests in Birmingham, Alabama, that attracted national attention following television news coverage of the brutal police response. King also helped to organize the 1963 March on Washington, where he delivered his "I Have a Dream" speech.

On October 14, 1964, King received the Nobel Peace Prize for combating racial inequality through nonviolence. In 1965, he and the SCLC helped to organize the Selma to Montgomery marches and the following year, he took the movement north to Chicago. In the final years of his life, King expanded his focus to include poverty and the Vietnam War, alienating many of his liberal allies with a 1967 speech titled "Beyond Vietnam".

King was planning a national occupation of Washington, D.C., called the Poor People's Campaign. King was assassinated on April 4, 1968, in Memphis, Tennessee. His death was followed by riots in many U.S. cities. Allegations that James Earl Ray, the man convicted of killing King, had been framed or acted in concert with government agents persisted for decades after the shooting, and the jury of a 1999 civil trial found Loyd Jowers to be complicit in a conspiracy against King.

King was awarded the Presidential Medal of Freedom and the Congressional Gold Medal posthumously. Martin Luther King, Jr. Day was established as a U.S. federal holiday in 1986. Hundreds of streets in the U.S. have been renamed in his honor. A memorial statue on the National Mall was opened to the public in 2011.

Where do we go from here: Chaos or Community?   READ THE BOOK!

A virtual movement from information to operation 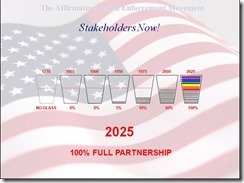 AMWS, August 22, 2013, Washington, DC -- Fifty years ago, civil rights activists from across the United States gathered here for one of the most momentous events of the 20th century. They marched and rallied around a shared message of civil liberty, civil rights, and economic opportunity for all.

It would be a good thing to say that we have made progress. It would be great if the measured steps of a few produced great strides in America’s fight for equality. But the truth is people are unemployed, underemployed, and scared to death about their children’s future. For too many in our families, the glass is not even half full.

We are all reminded of times where the needs of the many outweigh the needs of the few.  But, when the threat comes to your door, there is no doubt that your national security is priority one in your American dream.

The basic right to vote is in danger. It seems everyday another child dies from some form of violence. Our criminal justice system is anything but "just for all." Children are being left alone more as parents take on jobs that barely pays the bills. Too many people in too many communities struggle to find jobs and provide for their families. Too many dreams remain unfulfilled.

So, as neighbors from across America prepare to #MarchOnWashington, we invite you to join a virtual economic movement. SAVE a little money by connecting from home. Then SAVE a little more money by sharing the ride to church with friends and family members. Finally, you can SAVE by learning more about your finances. Take a free online FDIC MoneySmart Financial Literacy course today and upload your certificates of completion.

What will it take to prevent gun violence? One Nation Under God! We #MarchOnWashington for #EconomicSecurity. http://youtu.be/HMkWhOR4qzA

Divisive politics of the past have no future. We #MarchOnWashington for #EconomicSecurity on Our Streets, USA. http://youtu.be/N7uWSpqpVIM

Our children r more valuable than stuff dividing us. We #MarchOnWashington for #EconomicSecurity on Our Streets, USA. http://youtu.be/hSg6JlBsYBE

Let the children come to me. God’s kingdom belongs to them. We #MarchOnWashington for #EconomicSecurity. http://youtu.be/5751pNO9kDA

Message to Congress. Get along! We #MarchOnWashington for #EconomicSecurity on Our Streets, USA. http://youtu.be/pTarSW2XN94 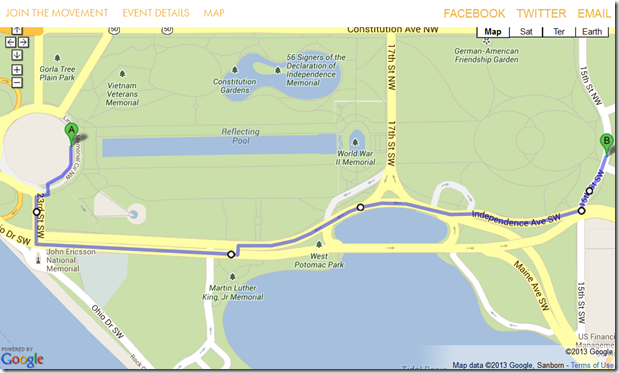 #MarchOnWashington begins 8:00 am Saturday August 24, 2013 at the Lincoln Memorial. marching to the King Memorial and ending at the Washington Monument.