A Moment in History’s Shadow 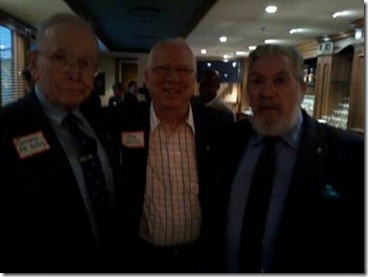 ABOVE: General P.X. Kelley pictured with Attorney Herb Harmon ( c ) at Bobby Vans Grill. The 28th Commandant of the Marine Corps invoked an enduring spirit during the annual gathering of the “Gang of Thirty,” commemorating the 237th Marine Corps Birthday. BELOW:  Insight on the commandancy.

AMWS, November 10, 2012, Washington, DC – Hard-chargin’ U.S. Marine Lance Corporal Dennis LeNard experienced something special about the Corps he served from 1989-1993. Now, Staff Director, Congressional Marines for the Office of Legislative Affairs of the U.S. House of Representatives, LeNard’s purpose and presence at the U.S. Capitol is to remind America’s elected that one voice can make a difference.

In true Marine fashion, LeNard charged up Capitol Hill to share what he had experienced only moments before at Bobby Van’s Grill in Northwest Washington, DC. Jim Hickey, the business owner had set a table for “calling to mind the glories” of United States Marines. The 28th Commandant of the Marine Corps stepped out from the shadows of legend and lore to reset America’s compass for a new direction forward.

On the eve of the Corps’ 237th Birthday, the oldest living commandant sowed into a gathering of seasoned leathernecks from his own vault of American values. “Gen. Kelley is an absolute hero to our Corps. We love him, we respect him, we revere him.” said General James F. Amos. “He’s a man of courage, a man of integrity and a great American patriot.”

The 35th Commandant of the Marine Corps was in “virtual” attendance at the annual gathering of the “Gang of Thirty.” But the “almost spiritual, religious bond between former and living Commandants” added value to service for those in the room and their reach around the globe, sharing the legacy of United States Marines. “The Gang” includes some of Washington, DC’s elite movers and shakers, maintaining a presence in almost every sector of government and society. Almost every commandant since Kelley has honored the occasion with a physical presence.

Marine Colonel Herbert N. “Herb” Harmon of DC’s prestigious Harmon and Wilmot law firm has perpetuated “espirit de corps” in the nation’s capitol for as long as any living Marine. That esprit de corps is “the capacity of a group's members to maintain belief in an institution or goal, particularly in the face of opposition or hardship.” According to Kelley, Harmon spearheaded the Marine Corps Marathon, an annual event the general refers to as “The Race.” Harmon stepped into race founder Colonel Jim Fowler's footprints and has since chaired the Marine Corps Marathon Ad Hoc Publicity Committee.

A word from the current Commandant of the Marine Corps added purpose to General Kelley’s participation, value to the commandancy, and vision for forward movement. “You know, I’ve been in the job now for about 18 days,” said General John F. Amos shortly after assuming command of the Marine Corps October 22, 2010.

Tomorrow, November 11th, Veterans Day, the family of U.S. Marines celebrates General Kelley’s 84th birthday, and a shared legacy as “the most faithful patriot and leader in service to our nation.” As I stood in General Kelley’s shadow for a moment after 40 years of active and retired life as a U.S. Marine, something clicked. It was louder than the sound a Marine rifleman hears right after B.R.A.S.S. I felt the presence of fallen heroes and wounded warriors whose blood, flesh and spirit define America as a nation.

Sometimes America needs to be reminded. That hard-chargin’ Marine Lance Corporal, in the midst of our nation’s elected, stands on the shoulders of the commandancy and every U.S. Marine. His “caucus” looked more like a fire-team of emerging leaders with no sense or fear of failure. Greg Jones, son of 32nd commandant and 22nd National Security Advisor General Jim Jones, seemed to be a natural for guiding common sense conversation.

The younger Jones has stood in the shadow cast by Harmon, Fowler and other ordinary Marines sustaining the extraordinary legacy of United States Marines. If ever a commander-in-chief and a congress needed a “What’s next?” in a period of uncertainty…they need just ask a Marine! Every one of us knows that FORWARD is part one (preparatory) of a two part order. Forward movement almost always follows with the command of execution, “MARCH!”