All and all, just another brick in the wall?

AMWS, August 23, 2020 – Republicans are “very excited” about an unprecedented political convention.  Factions of the RNC will leave the event with either a new vision from a surprise nominee or the reality of repeating history as just another brick in the wall. 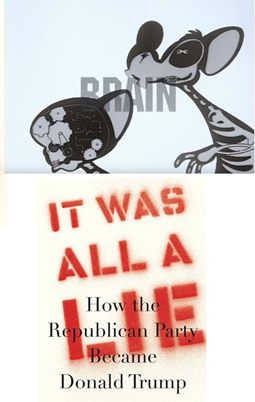 "We are going to have the opposite,” said Lara Trump of the Trump Campaign. “Ours will be hopeful and inspirational and patriotic, and you want people at the end of our four days to be reminded that America continues to be the greatest, most exceptional nation in the world.  So, we’re very excited for it," she added.  The Republican National Committee's Executive Committee voted on June 10, 2020 to adopt the same platform the party used in 2016.  “Building the wall” remains as a key component in an agenda to “Make America Great Again.”

According to Reuters, as many as eight Trump associates from the 2016 Trump campaign have been arrested and or convicted.  MAGA Mastermind Steve Bannon has been charged with defrauding Trump supporters in a campaign to the help build Trump’s signature wall along the U.S.-Mexico border, prosecutors said.

Some unlawful acts emerging from the Bannon-Trump strategy might actually be defendable in a hybrid form of Republicanism.  For example, Russia claims to be a democratic, federative, law-based state with a republican form of government.  However, it hardly reflects the spirit of glasnost (openness and transparency) envisioned during the Reagan-Gorbachev era.

According to the New York Times, Former President George W. Bush won’t support the re-election of Mr. Trump.  People familiar with their thinking suggest that Jeb Bush isn’t sure how he’ll vote.  But, on August 19, @JebBush tweeted, “Why in the world would the President not kick Q’anon supporters’ butts?  Nut jobs, rascists, haters have no place in either Party.”  Senator Mitt Romney of Utah won’t back Mr. Trump and is deliberating whether to again write in his wife, Ann, or cast another ballot this November.  Cindy McCain, the widow of Senator John McCain, is almost certain to support Mr. Biden but is unsure how public to be about it because a son is eying a run for office.

Prominent Republicans are resisting, though not necessarily engaging in the resistance, to become just another brick in the wall.  They have read the writing on the wall and are looking into political action committees such as The Lincoln Project.

The Lincoln Project, founded by a group of Republican operatives including George Conway, the husband of Trump adviser Kellyanne Conway, brought in $16.8 million.  AB PAC, the super-PAC arm of American Bridge 20th Century Foundation, which was co-founded by David Brock, a one-time conservative journalist, topped $10 million. Both say they are running ads attacking Trump, including in battleground states.  But, with American lives at stake, it’s neither brave nor responsible to just stand against Trump.  Republicans will need to stand up for America.

As more Republicans say they oppose Trump, and raise money to do it, how do #WeThePeople know who to trust?  Democrats tend to rely on grassroots infrastructure and influencers to address the historic “gulf of mistrust.”  As demonstrated in the 2016 the platform, the Bannon-Trump strategy distorts faith to support an alternate truth for a 30% minority.

There’s never been a better time or reason for becoming an envisioned “more perfect union.”  After several draft concepts for a United States, this year’s political conventions could be the last and first move from chaos to community.

Politics as usual between January 2019 and July 2020 has sucked more than $12 billion from the economy.  According to fundraising reports by the FEC, political action committees account for $6,151,777,554.  One PAC among the growing number is one that promotes an alternative to being counted as “just another brick in the wall.”

Priorities USA presents liberals and conservatives a progressive pathway to nation healing.  The Super PAC is building permanent infrastructure to engage Americans of all backgrounds at all times — not just on the eve of an election. Perhaps some enterprising leader will consider applying some of the $12 billion to end poverty.