CHAOS or COMMUNITY? The needs of the many are greater than the needs of the one?   When a certain spirit causes a religious leader to sexually abuse a child, and that child grows up drinking to forget the abuse, some sexually abuse others because they can. This pattern of slithering through historical protections threatens societal norms, and as such, #NationalSecurity.  #WeThePeople must weight all the facts, history and legacy if we are to know, Where De We Go From here?  #PrayerChangesThings 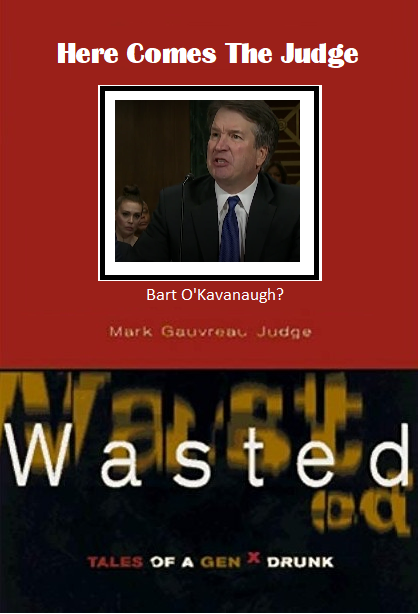 AMWS October 1, 2018, Virtual – Anyone expecting justice from a week-long FBI background investigation, may need a broader understanding of what a government investigation will and will not uncover.

The word, “justice,” might be defined as the maintenance or administration of what is just, especially by the impartial adjustment of conflicting claims.”  To be just, an institution must also conform to truth, fact, or reason.

“Injustice anywhere is a threat to justice everywhere.”  said Dr. Martin Luther King, Jr.  If you hope to administer justice in the courts, hire a good judge -- at a circus, you send in the clowns.

Investigators of 36-year old coverups may find a 1968 throwback to “The Trial” helpful in framing the long-endured unraveling of America’s dirtiest little secrets.
You can lighten up on Matt Damon’s Saturday Night Live testimony or the veiled judicial temperament of Comedian Pigmeat Markham.  In either case, revelations on sex crimes are making a mockery of formal courtroom etiquette.  On the first work day at the U.S. Supreme Court, we find eight justices anticipating the inevitable -- "Here Comes the Judge,"

One might ask, what could Pigmeat Markham possibly have in common with Brett Kavanaugh and Mark Judge? Investigators may need to examine expunged records of juveniles that never make it before any judge – appointed, elected nor comedic. Church leaders will need to scope parallel investigations for cause and effects of child sex abuse.  It’s not funny, but there is an inevitable choice for U.S. Senators who are not victims of sexual abuse.

For Catholics, this whole episode raises a disturbing question about the church’s continued involvement in providing elite education to affluent children.  The community, founded on a principle of love for little children, must reconcile inherited values with devastating outcomes for that generation labeled “X.”   It matters that Kavanaugh was captain of the school's basketball team and played as a wide receiver and corner-back for the school's football team.  The evidence suggests that he was a leader.

But, in the years before his 1983 graduation, something was running amuck at Georgetown Preparatory.  Many of Kavanaugh’s classmates, before and since, perhaps sought solace in the spirits.  We’re not talking about the Holy Spirit or even the spirit of the Holy Mother.  We’re talking about the spirit of irresponsible teenage drinking and countless public officials in leadership today who still can’t or won't recall what happened during a blackout..

Getting into this affluent culture has cost parents $50,000 or more in tuition.  But realities of alcohol and sexual abuse were perhaps not the return on investment parents anticipated. By 1990, the Georgetown Preparatory problem had manifested throughout its student body.  According to the Washington Post, large parties involved teenage consumption of alcohol and sexual activities.  Headmasters of multiple schools colluded through "a rare joint effort" to send a warning letter to parents.

At the start of the 1990 school year, Georgetown organized a public discussion with parents of students to discuss the problem.  The parties reportedly occurred without proper adult supervision. Parents were warned, "It would be hard to devise a better recipe for disaster than a social scene that includes the anonymity provided by an 'open party,' no adult supervision, considerable amounts of alcohol, and teenage hormones which encourage sexual or violent behavior."

How far back, and how deep are federal investigators willing to dig to discover links between confused, abused students, alcohol-emboldened teens and grown-ups inability to recall what happened and when?  Before we get to the pre-1990 Georgetown Preparatory culture through the recovering lens of alumnus Mark Judge, perhaps investigators will consider some institutional causes perpetuating these life-impairing effects.

Irresponsible alcohol consumption, offensive sexual behavior and male jock superiority might all stem from a pattern of sexual abuse.  Cases of child sexual abuse by Catholic priests, nuns and members of religious orders in the 20th and 21st centuries are widespread and have led to allegations, investigations, trials and convictions.

Accusations began to receive publicity from the late 1980s.  Revelations about decades of attempts by the Church to cover up reported incidents are coming to light from beneath a shadow of shame, regret and diffusion.  In many cases, boys and girls, some as young as 3 years old, may have been sexually abused.  The majority of reported victims were between age 11 and 14.

In real life, no one would imagine a Judge Pigmeat Markham holding court over America’s elite.  But, in the aftermath of testimony brought by Dr. Christine Blasey Ford, it’s hard not to imagine some deeply repressed effects of abuse in the high school yearbooks of now respected citizens.
Investigators need to travel no further than Suburban MD to examine the tree from which obviously poisonous fruit as fallen.  As good Catholics they’ve learned to, “Make a tree good and its fruit will be good, or make a tree bad and its fruit will be bad, for a tree is recognized by its fruit.”

Cases have also been brought against members of the Catholic hierarchy who covered up sex abuse allegations and moved abusive priests to other parishes, where the abuse continued.  Many of these involved cases in which a figure was accused of decades of abuse.  Frequently; such allegations were made by adults or older youth many years after the abuse occurred.

Investigators will need to consider advocates as well as the accused in getting to core causes of a rapidly spreading epidemic. #MeToo is but one early outcome to a history of dirty little secrets.  Somebody is going to need a hero.  And, perhaps Senator Lindsey Graham (R-SC) is not one to stand on the maverick shoulders of the late Senator John McCain.  Graham was safe before hijacking protocol established through an unprecedented surrogate interrogator.  It seems that Graham’s rage emboldened Kavanaugh.

But, not even the last Southern Baptist in the U.S. Senate can temper the Tsunami expected from the one-week investigation into sexual proclivities of the last two Supreme Court nominees.  Graham, who has reportedly “denied, denied, denied” being gay, commented about the latest news from the Catholic sex abuse scandal.  “This accusation has to be looked at in terms of our legal system.  It’s too old for criminal trial, it’s 36 years old. You couldn’t bring a civil suit because you can’t tell the court what time it happened and where it happened.”

September 27, 2018, Christine Blasey Ford testified under oath before the United States Senate Committee on the Judiciary. She was “with Brett Kavanaugh and Mark Judge at a high school party in 1982.” She was “pushed into a bedroom where Kavanaugh pinned me to a bed, groped me, and attempted to remove my clothing against my will,” while Judge watched and laughed.  Judge told The New Yorker he had "no recollection" of the alleged incident.

In context, thirty-six years after the fact, Lindsey Graham and 99 colleagues of the U.S. Senate are called upon to advise and consent on President Trump’s nomination of an alleged sex offender to serve on the U.S. Supreme Court.  In the interest of meeting arbitrary deadlines, we’ll want to afford this presentation the same level of seriousness as Senator Graham’s disturbing assessment of 36-year old accusations.

If you can find a copy of Mark Judge’s 1997 memoir about alcoholism, binge drinking, and hookup culture at Georgetown Preparatory School, investigators will want to waste no time binging on the pages of “Wasted: Tales of a GenX Drunk.”   In it, author Mark Gauvreau Judge recollects his early formative experiences growing up in suburbs of Washington, D.C. under Catholic school education.

The author describes his secondary education at Georgetown Preparatory as filled with heavy drinking and experiences of teenage alcoholism.  The book criticizes Alcoholics Anonymous for its lack of acknowledgement of physiological causes of alcoholism as a disease process. Judge explained his writing process behind the work on Wasted, saying he “wanted to create a frank and comedic book about alcoholism.” He observed that authors of prior recovery coaching books took pity upon themselves, and he wanted to make a book devoid of complaining to appeal to Generation X.

The New York Times characterized Judge's book as a "naive and earnest" work about alcoholism. Buffalo News said the book had, "the drama of a made-for-television movie".  The Washington Times commented that the author had been motivated by loneliness.  Mother Jones placed Judge's work within the genre of books about teenage alcoholism.

Demand for Judge's work significantly increased after reporting by The Washington Post on his books and the statements by Dr. Ford.  Washington Monthly and Arkansas Times concluded that "Bart O'Kavanaugh" in Wasted was likely a reference to Brett Kavanaugh.

Our particular take on current events responds to a revelation by one of our own.  Members of our own YouthUSA community shared insights on sexual harassment in the workplace.  Offenders, be they past victims, sick in the head or just trifling, need to be forewarned.  Your indictment may not come this week, or even before the mid-terms, but rest assured, your secret is out.   "Here Comes The Judge."