Am I My Brother’s Keeper? 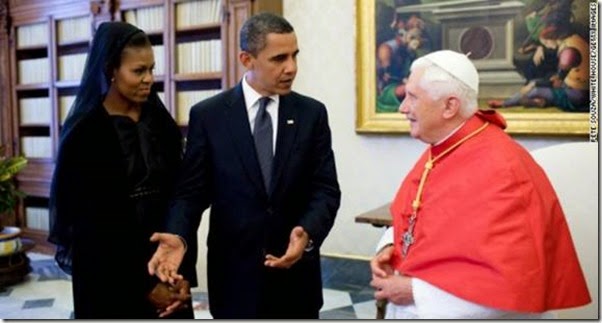 AMWS, March 29, 2014, Atlanta – President Barack Obama met with Pope Francis this week. A conversation lasting just under an hour perhaps addressed some of the most critical issues of our times. "I would say that the largest bulk of the time was discussing two central concerns of his," said the President. "One is the issues of the poor, the marginalized, those without opportunity, and growing inequality.”

Now, 2.1 billion Christians worldwide need to be very specific about their prayers.  About 13% of the U.S. population is weighing other folks’ needs against historically unmet needs of their own. The United States Department of Education is at Morehouse College this weekend. Government hopes to engage citizens in some national soul searching. The question of the day has been asked and answered since the genesis of humankind. “Then the Lord said to Cain, Where is your brother Abel?” “I don’t know,” Cain replied. “Am I my brother’s keeper?”

Unconfirmed reports that Southern Christian Leadership National President Charles Steele also visited the Vatican this week, feeds theories that helping the least among us is front and center on the world stage. Steele’s travels across the U.S. and around the world draw attention to the reality of historically disadvantaged Americans. In a nutshell, if an African American is counted as a “minority” in the United States, that equates to less than and not equal.

As the President heads home, his 2015 budget is headed for a Congress that has yet to connect with Our Street, USA or embrace the reality, “Yes! I am my brother’s keeper.” The president’s proposed budget funds a $56 billion Opportunity, Growth, and Security Initiative, split evenly between defense and non-defense priorities. Meanwhile, America’s national debt clock is ticking from $17.5 towards $18 trillion.

When you consider the total U.S. population, estimated at 300 million, the national debt is about $60,000 per citizen. “My Brother’s Keeper” as evidence-based intervention might simply leverage a fair share of the national debt against historically unmet needs to equip all Americans as equal partners. “A half century after the fall of segregation, America has yet to fulfill Dr. King’s dream of a beloved community,” said H. Benjamin Williams, Southern Christian Leadership Conference.

Williams has been working with local, regional and national partners on a “boots-on-the-ground” economic security intervention. The National Learn-2-Earn Partnership specifically identifies seven key areas of human need to include giving through grassroots community reinvestment.

“A holistic approach to addressing historic threats to African American families begins with healing,” said Williams. Quoting a passage from Martin Luther King, Jr.’s last book, Where Do We Go From Here: CHAOS OR COMMUNITY, Williams reiterated, “The poor can stop being poor if the rich are willing to become even richer at a slower rate.”

In case you are really interested is understanding the problem, the data has always been there. “Boys and young men of color — regardless of where they come from — are disproportionately at risk from their youngest years through college and the early stages of their professional lives,” according to the Obama Administration.

By the time they hit fourth grade, 86 percent of African American boys and 82 percent Hispanic boys are reading below proficiency levels — compared to 54 percent of white fourth graders reading below proficiency levels. African American and Hispanic young men are more than six times more likely to be murder victims than their white peers — and account for almost half of the country's murder victims each year.

President Lyndon B. Johnson declared an “unconditional war on poverty in America” on January 8, 1964, and within a few years oversaw the creation of an array of programs “aimed not only to relieve the symptom of poverty, but to cure it and, above all, to prevent it.”

The report ended with the declaration that, “It is time to renew our faith in the worth and capacity of all human beings; to recognize that, whatever their past history or present condition, all kinds of Americans can contribute to their country; and to allow Government to assume its responsibility for action and leadership in promoting the general welfare.”

It’s been 50 years since the Presidency committed itself to a War On Poverty. The White House today hopes to chart a course from CHAOS to COMMUNITY with, “A Roadmap for Growth, Opportunity, and Fiscal responsibility.” The President’s 2015 Budget offers a roadmap for accelerating economic growth, expanding opportunity for all Americans, and ensuring fiscal responsibility. It invests in infrastructure, job training, preschool, and pro-work tax cuts, while reducing deficits through health, tax, and immigration reform.

Recently, the President launched “My Brother’s Keeper” – a new initiative to help every boy and young man of color who is willing to do the hard work to get ahead. It establishes an interagency task force to evaluate what public and private efforts are already working, how to expand upon what works, and how the Federal Government’s own policies and programs can better support these efforts. The My Brother’s Keeper initiative aims to leverage participation from philanthropies, the business community, and elected officials to support this cross-sector effort.